How to Think About Sex, Dating, & Relationships

Gerald Hiested, who recently authored Sex, Dating and Relationships: A Fresh Approach (Crossway, 2012) with Jay Thomas, was asked a few questions to help us understand what the Bible has to teach us in these fields. This interview is copied from Between Two Worlds. 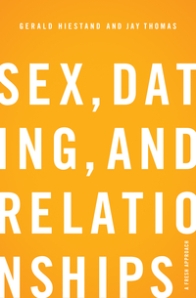 Likewise, the sexual ethic of the “neighbor relationship” is detailed in 1 Corinthians 7:9 and 1 Timothy 5:2—namely, that sexual activity is prohibited. We go into this in more detail in the book, but the crucial observation here is that the sexual boundary for all non-married relationships is complete abstinence. And this doesn’t mean only abstinence from sexual intercourse, but abstinence from all sexual activity. So in chart form, it looks like the below.

A main problem with contemporary dating relationships is that they tend to grant license to sexual activity that we would otherwise intuitively deem inappropriate. For instance, most Christian women won’t make out with just any guy; but they will make out with their boyfriend. And that, we believe, is a category mistake. The chart below illustrates the confusion.

In our book, we argue that a dating relationship is really just a subset of the neighbor relationship, and thus must be governed by its sexual guidelines. In short, we can’t slap the label “dating” on a male/female relationship and then justify engaging in sexual activity that we would otherwise deem inappropriate between unmarried men and women.

So if “the bounds of the neighbor relationship are binding until marriage” (p. 139), what tensions will Christians experience who asking: How far is too far before marriage?

In many respects, the entire book is a theological and exegetical attempt to answer this question. Pastors and parents have, I think, dropped the ball here. We’ve tended to push the burden of this dilemma back onto teens and singles. Our typical line goes something like this: “The Bible doesn’t really speak about sexual boundaries in dating relationships, so you’ll have to prayerfully develop your own standard.” But this has been a disaster in our Christian sub-culture. Telling teens and singles to develop their own sexual ethic is not pastorally responsible.

Our conclusion in this matter is pretty countercultural, and so my temptation here is to provide a prolonged defense and justification. But since that would require an entire chapter’s worth, let me briefly state the argument and then hope people will go to the book for the details.

We work primarily from 1 Corinthians 7:9, where Paul instructs non-married individuals to pursue sexual fulfillment exclusively in marriage. The implications in this passage are clear: sexual activity is to be reserved for the marriage relationship. So far, not very groundbreaking.

But how do we determine which physical activities are sexual?

Clearly some physical activities (like shaking hands, a kiss on the cheek) are not inherently sexual.

And other physical activities (oral sex, fondling) are clearly sexual.

There’s more to sexual purity than this, but framing things in this way provides a good deal of clarity regarding appropriate sexual boundaries. By this definition, passionate kissing is clearly a sexual activity, and thus to be reserved for the marriage relationship. I’ve heard a number of creative attempts to work around this logic, but none are very convincing.

The great compromise of contemporary evangelical sexual ethics is that we have justified foreplay as a legitimate part of pre-marital relationships. This doesn’t hold up theologically or scripturally, and it certainly doesn’t work pragmatically. Foreplay is meant to propel us toward consummation. It shouldn’t surprise us that evangelical teens and singles are struggling to maintain sexual purity; we’ve basically said it’s OK to begin having sex, just as long as they don’t finish. And that’s not a recipe for chastity.

In addition to exacerbating sexual impropriety, you also argue that dating relationships tend to create unhealthy emotional expectations. Can you explain?

A primary concern of the book is to help pre-engaged couples keep their wits about them. We tell women, “Don’t give your heart away to a man who isn’t sure what he’s going to do with it.” And we tell men, “Don’t try to win the heart of a woman if you don’t know what you’re going to do with it.” We’re not against a man pursuing a woman. But we are against a man doing this irresponsibly. In bygone days, a man would woo a woman toward marriage. Nowadays a man woos a woman to be his girlfriend. Women are giving themselves away—emotionally, romantically, sexually—to men who have made no promises.

In the book you suggest that pre-marital relationships should only become romantic at engagement. You write, “To romantically woo a woman, or to give your heart away to a man, prior to a marriage commitment is to paint an unclear portrait of Christ and the church. . . . The time to bring on the romance is when you’re ready to bring on the ring!” (87, 106). However, you also argue that the standard of sexual purity for the neighbor relationship, even after engagement, remains the same. So there seems to be some tension here. Explain what this looks like.

Yes, the trick is to happily anticipate sexual intimacy in a way that it doesn’t lead to immorality. Certainly once a man and woman have agreed upon marriage, it is appropriate that they have a happy sense of longing and desire to experience the relational joy of sexual intimacy with one another. We are not suggesting that an engaged couple repress their sexual and romantic feelings for each other, or pretend that they are not sexually attracted to each other. It is never wrong to anticipate a good gift from God. But it is wrong to anticipate the gift in such a way that it breeds impatience or disobedience. Three times in the Song of Songs unmarried individuals are told not “to arouse or awaken love until it so desires” (2:7, 3:5, 8:4). In the context of these admonitions, sexual love does not desire to be awakened when it has no opportunity for consummation.

Since sexual activity must still be reserved for marriage, it is incumbent that an engaged couple exercise wisdom regarding the extent to which they “fan into flame” sexual desire through physical touch, spending time alone, discussing sexual intimacy, etc. Even within marriage there will be times when sex will not be possible for certain seasons, and such times are not made easier by fixating on sexual intimacy; to the surprise of many singles, continence will be required even in marriage! So I don’t recommend engaged couples, still months from their wedding, spending too much time thinking or talking about sexual intimacy, or even allowing their thoughts to wander in that direction for too long. The sexual tension will build naturally enough—no need to help it along to the point that it become unmanageable.

You argue that how we live as Christians in our sexual relationships broadcasts a message to the world about the gospel, either rightly or wrongly. What would you say to Christian singles? What does sexual purity before or outside of marriage say about the preciousness and beauty of our union with Christ?

Christ is faithful to his bride, so likewise husbands should be faithful to their wives. Christ reserves himself exclusively for the church, so too we should reserves ourselves exclusively for our spouse. The point here is that God’s sexual ethics are not arbitrary, but point to the greater and higher reality of the gospel. Christian sexuality is grounded in a fixed norm that anchors our view of sexual ethics, as well as informs our self-understanding as sexual beings. Thus when a single person refrains from sexual activity, this celibacy points toward a higher reality—Christ saved himself for his spouse, and so too the single Christian saves himself or herself for a future spouse. Sexual chastity, then, is a great testimony to the gospel.

What would you say to those who have fallen short of the high biblical standards for sexuality, or are struggling with a sense of shame from past mistakes?

The great beauty of sex and marriage is that they point beyond themselves to the gospel. And the glory of the gospel is that Christ made himself one with us, taking upon himself all that we are, and giving us all that he is. It is this glorious exchange—typified by human marriage—that speaks of our hope. All of us fall short of God’s ideal. The ravages of sin have left each of us with a disordered sexuality. The good news of the gospel is that, in our union with Christ, God forgives our past and empowers us to live beyond our natural selves. So while our book calls Christian singles to a high calling, we hope it also encourages and deepens their confidence in the grace, power, and mercy of God.

Interested in thinking more deeply about the areas of sex, dating, and relationships? Two suggestions: first, go buy the book (link to Amazon). Second, if you’re a parent, consider joining us for a Sticky Faith Gathering! Read the original post at Between Two Worlds.

Brian J. Lund is minister of Word & Sacrament at Zion Evangelical & Reformed Church. You can follow him at his website or @BrianJLund.
View all posts by blund →
This entry was posted in ministry, resources and tagged marriage, parenting, sex, youth. Bookmark the permalink.